IMPORTANT NOTE: This website you are currently viewing is a private individual undertaking of Andreas Philip Gross Enterprises. It is NOT the official government-run City of Pullman website operated by the Pullman Municipal Government.  You can find the official City of Pullman, Washington, USA (.gov) website HERE.
Cookie Notice: This site uses cookies from Google to deliver its services and analyze traffic. Your IP address and user-agent are shared with Google along with performance and security metrics to ensure quality of service, generate usage statistics, and to detect and address abuse. Please note: this is something the website itself, which is built on Google's Blogger platform, does. Andreas Philip Gross Enterprises did not put these cookies on the site. If you have a problem with this you are welcome to change the cookie settings on your device or leave this website at any time.  FOR MORE ABOUT YOUR PERSONAL PRIVACY IN RELATION TO THE USAGE OF THIS WEBSITE, CLICK HERE.

If you are looking for COVID-19 updates for Pullman, Washington, CLICK HERE (external site).

Lewiston Airport (LWS) - There is also an airport down in the Lewis-Clark Valley, a 40 minute drive South of Pullman.  Depending on where you are flying in from (i.e. taking different flight routes into consideration), this may be your closest airport to fly into.  The Lewiston Airport (Airport Code LWS) services the cities of Lewiston, Idaho, and Clarkston, Washington, and the Greater Quad Cities Region of Pullman-Moscow-Lewiston-Clarkston.  Book a flight today!

Alaska Airlines is a major carrier into and out of Pullman.

Feel free to go ahead and check out the Pullman-Moscow Regional Airport Webcams here, courtesy of Washington State Department of Transportation.

Here are some links to interesting YouTube videos about the PUW Airport:

Posted Oct. 10, 2019, by KREM 2 News.  This is a news story about the completion of the PUW Runway Realignment Project.

Bus: In terms of inter-city travel, Northwestern Trailways (officially part of the Amtrak Bus-Train Network) is the major bus company that serves Pullman.  It's Boise-Spokane route goes through Pullman, stopping in Colfax as the next stop headed North (on it's way up to Spokane and the Spokane Airport) and Moscow, Idaho, as the next stop headed South (on it's way down to Boise, with numerous stops in several Idaho cities along the way).  Check out the Northwestern Trailways Spokane-Pullman-Moscow-Lewiston-Boise Route, as it is officially called, here.  One of the many great thing about this route is that you can fly into Spokane and get a bus straight into Pullman directly from the Spokane Airport.


Car: Road tripping it into the Land of the Cougs (Pullman)?  The closest large city, by the standards of the Great Inland Northwest (over 200,000 people), is Spokane, Washington, located approximately 90 miles North of Pullman.  U.S. Interstate 90 runs through Spokane, Washington, and Coeur d'Alene, Idaho.  U.S. Route 195, with 60 mph speed limits most of the way, drops down from Spokane and runs South to Pullman.  Drive time between the two cities is roughly an hour twenty minutes.  This route by-passes almost all towns.

U.S. Route 95, with speed limits of between 55-65 mph on the "open road" (much slower through towns along the way - this route does not by-pass towns) drops down at Coeur d'Alene and runs South to Moscow, Idaho.  Drive time is roughly an hour forty five minutes to two hours (into Moscow, Idaho).  The drive on U.S. Highway 95 is very beautiful.  You go through Coeur d'Alene Nation (also referred to as Coeur d'Alene Indian Reservation) on the way and climb up and over Moscow Mountain just before entering Moscow on the Northern edge.

By Train (NOTE: you can't do this anymore): 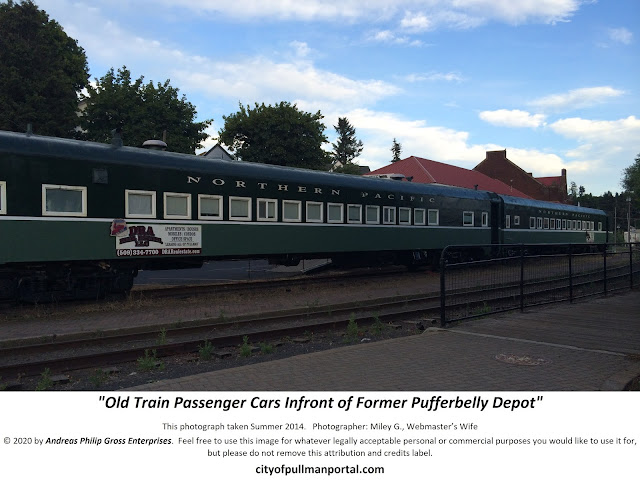 From the great heyday days of the U.S. Railroad era that colonized the American West up until as recently as the 1960s, passenger trains use to run regular routes in and out of Pullman.  After the passenger routes stopped running, periodic cargo routes still ran - with ever-decreasing frequency - up until right around 2010.  In the Summer of 2018 active removal of railroad tracks began at major road crossings.  The long and the short of it: you can't get to Pullman by train any longer.  Although you can still buy a ticket to Pullman through AmTrak, the last leg of the journey from Spokane is by bus (Northwestern Trailways - see "Bus" above).